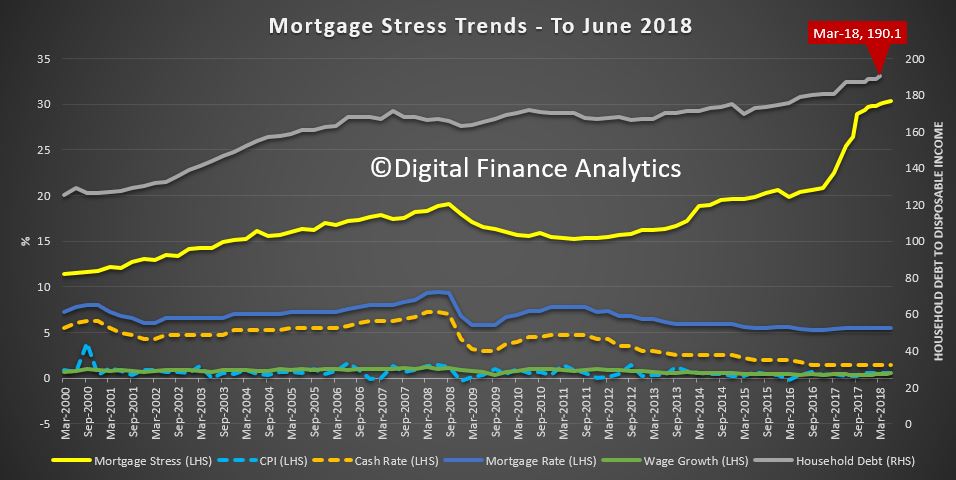 The latest RBA data on household debt to income to March reached a new high of 190.1 [1] … 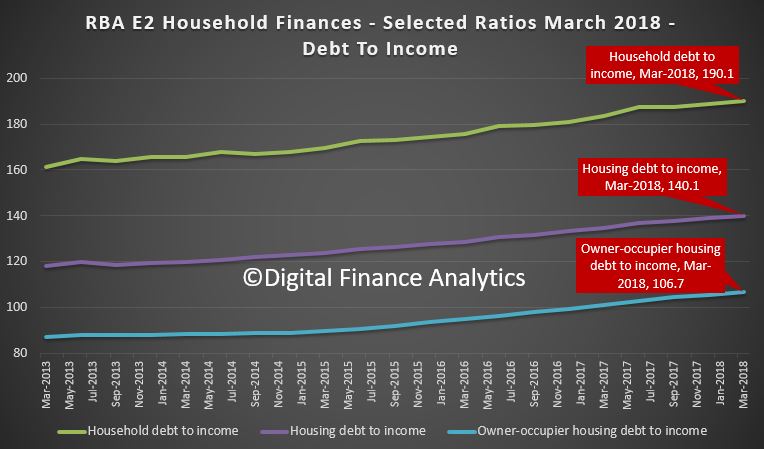 … so no surprise to see mortgage stress continuing to rise. Across Australia, more than 970,000 households are estimated to be now in mortgage stress (last month 966,000). This equates to 30.3% of owner occupied borrowing households. In addition, more than 22,000 of these are in severe stress. We estimate that more than 57,100 households risk 30-day default in the next 12 months. We expect bank portfolio losses to be around 2.8 basis points, though losses in WA are higher at 5.2 basis points.  We continue to see the impact of flat wages growth, rising living costs and higher real mortgage rates.

The latest S&P Ratings data shows a rise in 90 day plus delinquencies in the SPIN series for April, from the major banks. So despite the fact it only covers MBS mortgages the trend is consistent with our stress analysis! 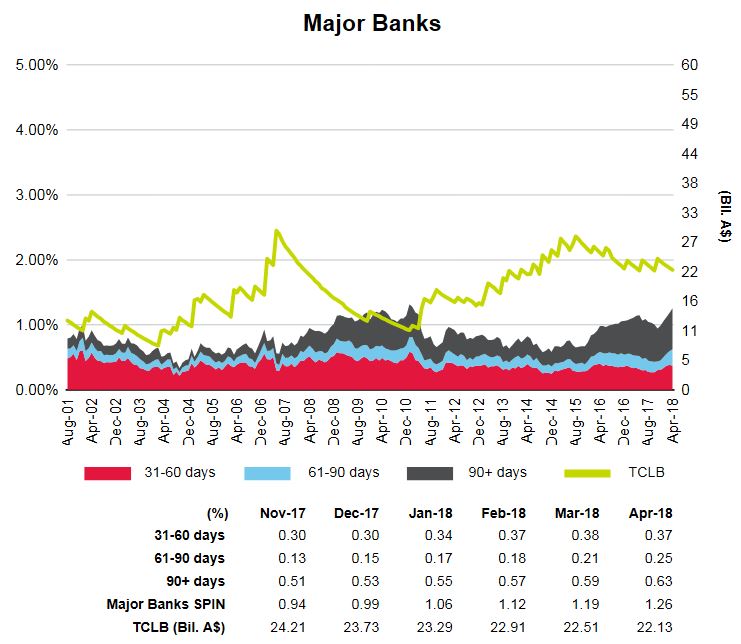 The inevitable result of too lose lending standards and easy loans is creating an intractable problem for many households given the continued low income growth, high cost environment. This also means risks to lenders continue to rise.

Our surveys show that more households are keeping their wallets firmly in their pockets as they try to manage ever tighter cash flows. This is an economically significant issue and will be a drag anchor on future growth. The RBA’s bet on sustained household consumption looks pretty crook. Even now, household debt continues to climb to new record levels, mortgage lending is still growing at an unsustainable two to three times income. Falling home prices just adds extra picante to the problem.

We continue to see households having to cope with rising living costs – notably child care, school fees and fuel – whilst real incomes continue to fall and underemployment remains high. Households have larger mortgages, thanks to the strong rise in home prices, especially in the main eastern state centres, and now prices are slipping. While mortgage interest rates remain quite low for owner occupied borrowers, those with interest only loans or investment loans have seen significant rises.  Rate pressure will only increase as higher Bank Bill Swap Rates (BBSW) will force more lenders to lift their mortgage rates, as a number of smaller players already have done. 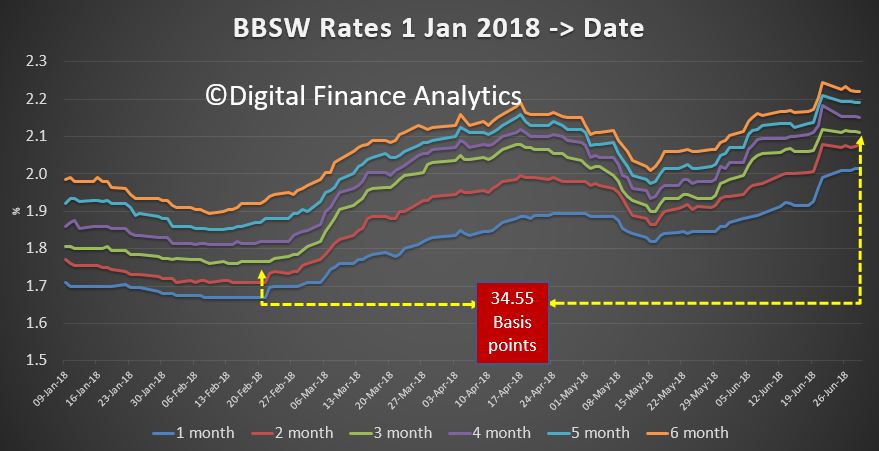 Our analysis uses the DFA core market model which combines information from our 52,000 household surveys, public data from the RBA, ABS and APRA; and private data from lenders and aggregators. The data is current to end June 2018. We analyse household cash flow based on real incomes, outgoings and mortgage repayments, rather than using an arbitrary 30% of income.

Households are defined as “stressed” when net income (or cash flow) does not cover ongoing costs. They may or may not have access to other available assets, and some have paid ahead, but households in mild stress have little leeway in their cash flows, whereas those in severe stress are unable to meet repayments from current income. In both cases, households manage this deficit by cutting back on spending, putting more on credit cards and seeking to refinance, restructure or sell their home.  Those in severe stress are more likely to be seeking hardship assistance and are often forced to sell.

Probability of default extends our mortgage stress analysis by overlaying economic indicators such as employment, future wage growth and cpi changes.  Our Core Market Model also examines the potential of portfolio risk of loss in basis point and value terms. Losses are likely to be higher among more affluent households, contrary to the popular belief that affluent households are well protected. 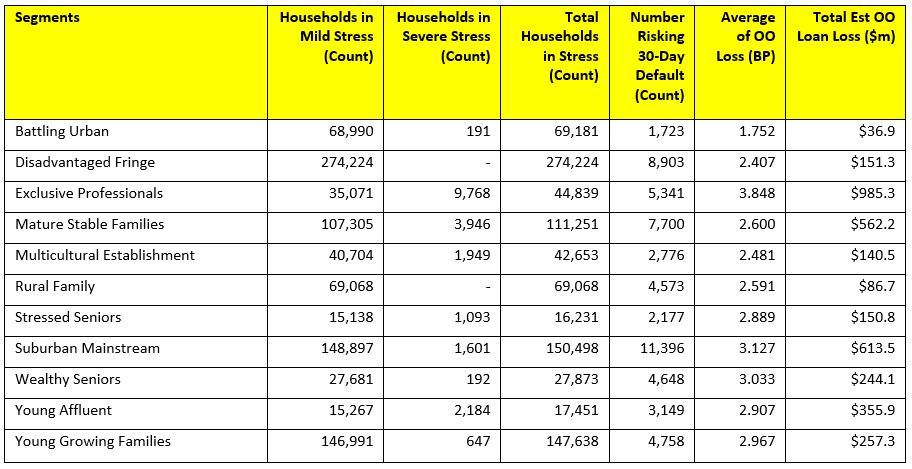 Stress by The Numbers.

A fuller regional breakdown is set out below.

Here are the top 20 postcodes sorted by number of households in mortgage stress. 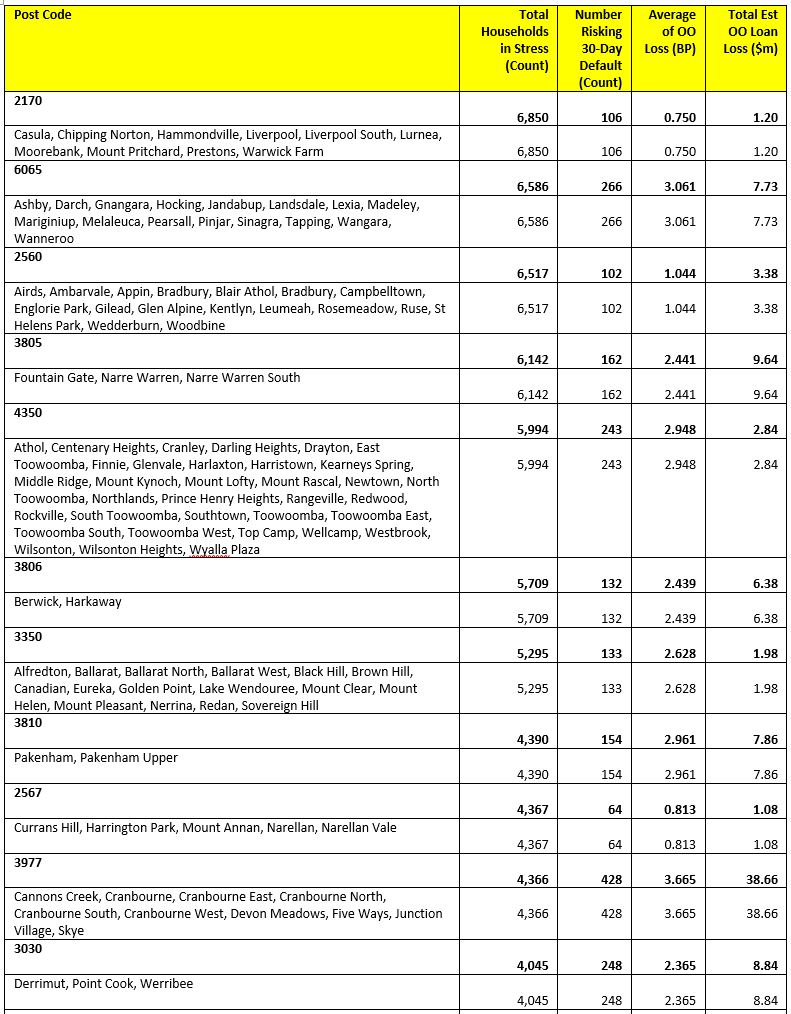 The rise in mortgage stress does not occur in a vacuum. The revelations from the Royal Commission into Misconduct in the Banking, Superannuation and Financial Services Industry (the Commission) have highlighted deep issues in the regulatory environment that have contributed to the household debt “stress bomb”. The most significant area of law discussed by the Commission has been responsible lending. Yet most of the commentary on the regulatory framework has been superficial or poorly informed. For example, several commentators have strongly criticised the Australian Securities and Investments Commission (ASIC) for not doing enough but have failed to explain what ASIC has in fact done, and what it ought to have done. Gill North, Professor of law at Deakin and a Principal of DFA suggests that” APRA (and not ASIC) should be the primary focus of regulatory criticism. APRA has failed to adequately prepare Australia for future financial system instability and its prudential supervision of home lending standards and practices over the last 5 years has been woeful”.

North has published widely on responsible lending law, standards and practices over the last 3-4 years, and continues to do so. Her latest work (which is co-authored with Therese Wilson from Griffith University) outlines and critiques the responsible lending actions taken ASIC from the beginning of 2014 until the end of June 2017. This paper will be published by the Federal Law Review, a top ranked law journal later this month.

The responsible lending study by North and Wilson found that ASIC proactively engaged with lenders, encouraged tighter lending standards, and sought or imposed severe penalties for egregious conduct. Further, ASIC strategically targeted credit products commonly acknowledged as the riskiest or most material from a borrower’s perspective, such as small amount credit contracts (commonly referred to as payday loans), interest only home loans, and car loans. North suggests “ASIC deserves commendation for these efforts but could (and should) have done more given the very high levels of household debt. The area of lending of most concern, and that ASIC should have targeted more robustly and systematically, is home mortgages (including investment and owner occupier loans).”

Reported concerns regarding actions taken by the other major regulator of the finance sector, the Australian Prudential Regulation Authority (APRA), have been muted so far. However, an upcoming paper by North and Wilson suggests APRA (rather than ASIC) should be the primary focus of criticism. This paper concludes that  “APRA failed to reasonably prevent or mitigate the accumulation of major systemic risks across the financial system and its regulatory approach was light touch at best.”