Banks are quite entitled to increase interest rates at any time. However, increasing due to funding cost increases which may be caused by their own lending policies does not reflect well. In the shadow of the Banking Royal Commission perhaps they should hold off, but I doubt it.

This article originally appeared on Credit Suisse, via  Damien Boey.

The limits of pass through

We have just published an article on “The limits of pass through”. It explains why we think the economy is in for a combination of tighter lending standards and out of cycle rate hikes, lowering our benchmark for neutral rates. We argue that there are at least 50bps worth of out of cycle rate hikes in the pipeline, and that the pipeline of out of cycle hikes is likely to continue getting larger for as long as the RBA cannot adequately explain wide interbank credit spreads. This article expands on previous work by:

1.    Constructing a more explicit “levels” model of the mortgage spread to the cash rate. Previously, we introduced a dynamic, or “changes” model. 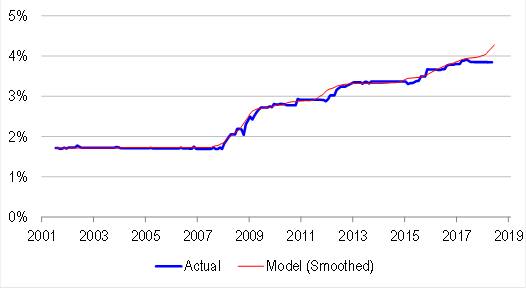 3.    Examining RBA work on the issue of pass through based on the way the composition of banks’ balance sheets responds to declines in the cash rate.

In the June meeting statement, the RBA suggested that we may see more tightening of lending standards, but dismissed the risk of out of cycle rate hikes. Bank officials suggested that effective mortgage rates have been declining, rather than rising. But this assertion contrasts with the Bank’s own analysis which suggests that average standard variable mortgage rates are rising. Perhaps Bank officials are referencing declining rates on fixed rate mortgages, or substitution behaviour by mortgagees to get the lowest rate structure. Perhaps also, they are expressing conviction that the Royal Commission has heightened political sensitivity to the actions of the banks, such that they cannot put through out of cycle rate hikes in the interim.

We disagree with the Bank’s view. We think that we will see a combination of tighter lending standards and out of cycle rate hikes. We are not looking at an “either” “or” situation. While out of cycle rate hikes have not happened in force, just yet, there is some evidence that smaller lenders are about to hike in response to “funding pressures”. And it is only a matter of time before the larger lenders follow.

The key issue is that the pipeline of out of cycle rate hikes is growing, with no end in sight until the RBA resolves the pricing mystery in the interbank market. There is too much pipeline pressure for adjustment to be borne by just one lever of credit creation, because interbank spreads are so persistently, and mysteriously wide. But recent commentary and the lack of responsiveness of interbank spreads to liquidity injections suggests to us that the Bank is no closer to resolving the mystery than it was in April, when it first noted tightening. The sheer depth of the pipeline of out of cycle rate hikes due to elevated funding pressures is beyond what policy makers are currently envisaging.

To be sure, Banks do not have to hike rates out of cycle, or limit pass through of potential RBA rate cuts to end borrowers. They could cut deposit rates. Or they could take a hit to profitability, effectively passing on the funding pressure to shareholders rather than borrowers. But interestingly:

1.    RBA work suggests that there are non-linearities in pass through when cash rates fall, precisely because deposit rates are already so low. As the cash rate falls, the relative cost of low/no interest fixed deposits increases. Substitution out of higher yielding deposits into low/no interest fixed deposits offsets this increase in relative cost – but there is a limit to the offset once the cash rate falls too far.

2.    If margins take a hit, or are likely to take a hit, potentially banks could tighten lending standards even more aggressively than they currently are doing. Interestingly, interbank credit spreads currently point to a much sharper fall in loan approvals than our proprietary credit conditions index, based on publicly available data on bank lending standards. In other words, the growth shock from incremental credit tightening may be just as bad, if not worse, than out of cycle rate hikes, or lack of pass through. The issue is that corporate credit spreads are unusually low in comparison with interbank credit spreads.

Many argue that the Bank Royal Commission ought to prevent banks from hiking rates out of cycle for quite some time, because of heightened political scrutiny. But if all the Commission did was to raise awareness of the true risk profile of lending, then arguably all that should happen to correct this is for banks to adjust their pricing. After all, between themselves, they already have – the next logical step is to do so with respect to end borrowers. Also, it is interesting to note that previous episodes of political scrutiny on the banks have still not been able to prevent out of cycle hikes, or incomplete pass through of RBA rate cuts.

Our analysis suggests that there are at least 50bps worth of out of cycle rate hikes in the pipeline due to higher risk manifesting in higher interbank credit spreads. This is even before accounting for diminished pass through because of the direct effects of rate cuts on banks’ balance sheets (as per the RBA’s analysis).

If there are 50bps+ worth of out of cycle rate hikes in the pipeline, and the RBA only has 1.5% worth of potential cuts at its disposal, the maximum degree of pass through is less than 66%. Under these circumstances, the RBA has to work harder to deliver effective easing to end borrowers (should they need it), and the neutral rate falls. Using the most recent data, the upper bound estimate for the neutral rate should fall to 1.5%, the current level of the cash rate. In other words, without the RBA doing anything, policy settings have already neutralized.

This may be appropriate given that the economy has hit the mid-point of estimates of potential growth recently (3%+), and the output gap has closed. But going forward, the leading indicators point to sub-trend growth, and widening of the output gap. As such, we think that there is scope for re-assessment of the RBA’s current policy stance.

To be sure, officials will be worried about lack of pass through, and therefore will be reluctant to cut rates. They will also be worried about the tightening impact of rate cuts on savers, rather than borrowers. But the longer officials wait, the more work they will have to do, because the pipeline of bank funding cost pressures is too great.

Either effective borrowing rates rise more than they anticipate, or lending standards tighten by more than they expect. Either the neutral rate falls because of incomplete pass through, or because growth slows much more sharply than forecast.

I humbly suggest that they’re not hiking only owing to the royal commission ripping away the political cover to do so. But if they don’t hike then profits are going to get hit 3-4% on the net interest-margin squeeze and the bank bear market really get moving. If they do then look out below house prices.