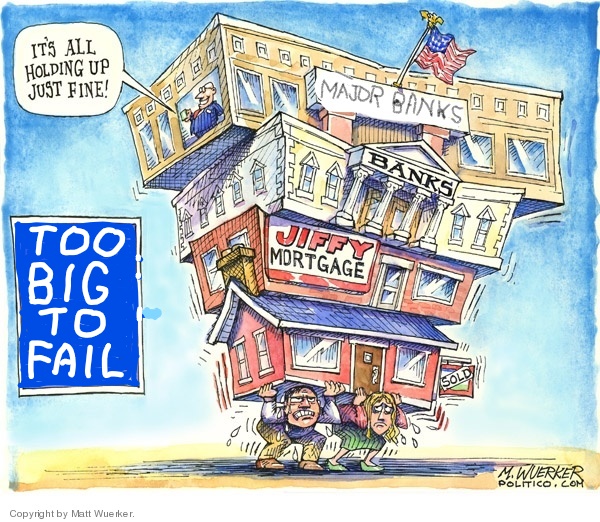 An Australian financial system convention that has been accepted for many years is that Major Banks are too big to fail and carry implied government guarantees. The Financial System Inquiry recommended that this risk to the taxpayer is significantly reduced by making Major Banks “unquestionably strong”. This recommendation has been accepted by the Government and it’s APRA’s job to enforce the standard.

Capital requirements are very important for many reasons besides the protection against losses (“unquestionably strong”). Whilst a bank’s weighted cost of capital and debt increases as the amount of capital increases (there is some academic debate on this) the much bigger implications are in Major Banks’ ability to grow which is ever more limited by larger capital requirements. Whilst banks can create money simply by lending, they can’t just create the capital to support the lending risk. As a bank grows credit it needs to raise capital and this must come from retained earnings or externally raised. As credit grows banks do not like to continually raise capital as it dilutes return on equity, a negative feedback loop that can maintain system stability if capital requirements are sufficient.

Whilst this paper critiques APRA’s current increases in capital requirements as too little for now and for all the wrong reasons, for those in the mortgage industry APRA’s final conclusion in the Information Paper points to significant long-term change (read increases) in Major Banks’ capital requirements.

“ The assumption that residential mortgages are relatively low-risk credit exposures, while generally appropriate when viewed at the level of individual loans, is open to challenge when the concentration of mortgage exposures within the overall balance sheet of the banking system is high and increasing, underwriting standards have become less stringent over time, and the capital framework does not adequately address this concentration…………….A central element of the implementation approach for ‘unquestionably strong’ will therefore be strengthened capital requirements for residential mortgage lending.”

So APRA is clearly pointing to not just higher capital requirements for Major Banks and banks over-all, but in addition, higher capital requirements for residential mortgages to cover the systemic risk built up in Australian system due to the concentration of mortgages on Australian banks’ balance sheets. The future then is one where the mortgage market in Australia will likely be open to more competition, especially from the non-bank sector.

Nevertheless, I believe that APRA should be subject to intense scrutiny on its Information Paper due to the immense importance to the Australian taxpayer in the Major Banks being “unquestionably strong”. In explaining how APRA will meet this standard the Information Paper does a poor job.

APRA’s current new requirements for Major Banks and Macquarie Bank that use the Internal Rating-Based (“IRB”) approach to capital adequacy is as follows:

“….., APRA has concluded that it will be necessary to raise minimum capital requirements by the equivalent of around 150 basis points from current levels to achieve capital ratios that would be consistent with the goal of ‘unquestionably strong’”

“ In the case of the four major banks, APRA expects that the increased capital requirements will translate into the need for an increase in CET1 capital ratios, on average, of around 100 basis points above their December 2016 levels. In broad terms, that equates to a benchmark for CET1 capital ratios, under the current capital adequacy framework, of at least 10.5 per cent.

100 basis points or 1% of extra capital (CET1) doesn’t sound much to get to “unquestionably strong”. No wonder the market reacted positively. So how did APRA decide that a CET1 ratio of 10.5% (or an increase of roughly 10%) for Major Banks would make them unquestionably strong?

“The nature of the business of ADIs is risk-taking. In establishing standards that will generate unquestionably strong capital ratios, the goal should be to further reduce the risk of failure of an ADI, and thereby the risk of a call on taxpayer support, but stop short of attempting to eliminate this risk altogether. In other words, unquestionably strong capital ratios should not seek to remove, or be perceived as removing, the risk of ADI failure”

It’s in this statement or goal that we have the first of many problems. Where you have a well diversified financial system with many independent banks, I would agree with APRA’s goal. In Australia we do not have that diversity. We have Major Banks dominating market share with at least 80% share in all banking segments. If one of the Major Banks were to fail, in all likelihood all Major Banks fail. In these circumstances isn’t it more appropriate that Major Banks are calibrated so that the risk of failure is eliminated? Besides protecting the taxpayer, wouldn’t this also encourage the creation of more banks that by default may allow some smaller banks to fail but create system stability?

Major Banks enjoy a huge advantage over their other banking rivals (except MBL) in the amount of capital that needs to be held against their assets the majority of which are residential mortgages. This is not just a cost advantage but as described earlier this allows Major Banks to drive credit growth faster and harder than banks on standard capital calculations. APRA demonstrates this advantage clearly in Figure 10.

In determining the actual capital/CET1 ratio for “unquestionably strong” APRA refers to a number of comparisons that it uses.

In comparing Major Banks internationally APRA refers to the July 2015 paper, International Capital Comparison Study . Using this study APRA made adjustments due to its “conservative implementation of the Basel Committee’s framework”, as follows;

“These adjustments resulted in internationally comparable CET1 capital ratios approximately 300 basis points higher than the ratios calculated under the APRA standards applying at that time.”

A 300 basis point capital credit is absolutely massive especially compared to APRA’s extra capital requirement of 100 basis point. APRA’s comparison paper has been debunked previously, item by item, and I do not have the space to do that again. Although I would point out that differences in definition of capital may have some validity but that only accounts for a maximum of 100 basis points. The other 200 basis points relates to IRB models which are impossible to compare between banks unless of course you had all the models which APRA does not.

I must admit that I have been struggling for years to get my head around what APRA is doing with these adjustments it seems to make no sense at all. APRA are making adjustments to Basel requirements on the basis of being a tough regulator and then readjusting when determining unquestionably strong capital requirements for Major Banks. What is the purpose of making the adjustments in the first place?

But let’s use APRA’s own words to point to the study’s fallibility.

APRA are setting capital standards that are “UNQUESTIONABLY” strong. How then could APRA use its comparison study when it says in the study;

“……. both the FSI and APRA have noted that a direct comparison of banks’ capital adequacy ratios across jurisdictions is challenging. There is no single, internationally-harmonised measure of capital adequacy that is publicly available.”

Apparently international bank comparisons that are challenging with no measure publicly available leads to “unquestionable” benefits for Major Banks.

Figure 3 below clearly shows the illusory capital that APRA and Major Banks have created.

Figure 3 Note: APRA’s representation of the dark and light grey adjustments as if it was actual capital. Fake capital?

Let’s move to APRA’s Rating Agency comparison. For this APRA turns to S&P.

“APRA has considered analysis based on S&P’s risk-adjusted capital (RAC) ratio, which S&P uses as an input in assessing the capital adequacy of a bank.13 This ratio differs from the Basel framework calculation of regulatory capital ratios and so provides an alternative means of assessing capital strength” So what did that produce?

“The latest published average RAC ratio of the four major banks was 9.3 per cent,15 producing a capital strength assessment of ‘adequate’.”

What, “not unquestionably strong”? Well actually, APRA adjusted the analysis. “APRA has adopted an economic risk score of 3 for the purposes of its analysis.” Whilst S&P assessed “Australia’s current economic risk score of 4 is representative of a heightened risk environment,”. APRA’s adjustment allowed Major Banks to be in the “strong” range.

I’d suggest at this stage that APRA is struggling on the “unquestionably strong” front.

“The results of APRA’s 2015 ADI stress test indicated that the four major banks’ CET1 capital ratios, on average, would be eroded by in the order of 350 basis points during the stress event”.

APRA concluded that “a major bank’s capital ratio eroded in the order of 350 basis points, a bank would need an operating CET1 capital ratio in the range of 10 to 11 per cent in normal times” consistent with APRA’s recommended increase as noted above. APRA believe that with a CET1 ratio of 8% after a stress event that Major Banks would be able to operate as normal.

The conclusion I believe is questionable. Firstly the market’s view of risk weighted assets would certainly have changed after any stress event, certainly forcing extra capital to be raised (taxpayer funded?). More importantly is the leverage ratio discussed below. After APRA’s stress event, Major Banks would have a leverage ratio of 2.5% or be geared 40 times based on assets. Would Major Banks be able to operate normally on that ratio without significant capital injection. The answer is certainly not, unquestionably so.

Turning to the Leverage Ratio, Major Banks sits at just below the median. Not top quartile but below half the bank’s international peers. Figure 9 demonstrates the point.

Figure 3 The leverage ratio gives a good picture on the sensitivity of Major Banks to system stress.

Nevertheless APRA provides some spurious justification that all is OK.

“As a large proportion of assets in the Australian banking system are residential mortgages, which benefit from lower risk-weights relative to other types of lending, the reported leverage ratios of Australian ADIs will generally be expected to be lower than those of overseas counterparts, all else being equal “

It also should be noted that many international banking peers, especially in Europe, have large exposures to sovereign debt that has very low to zero risk weights. Perhaps APRA could have mentioned how this would decrease the risk weighted assets and therefore the leverage ratios of its peers.

The Major Banks are certainly not “unquestionably strong” based on international comparisons of leverage ratios.

APRA has made a very poor case for its actions in limiting Major Banks’s added capital requirements (for now) to 100 basis points. The standard of “unquestionably” has been set by the FSI and adopted by the Government, the Australian people. Why is APRA so reluctant to enforce that standard? My view is that its this very question that allows APRA free reign. Why question APRA as they have no reason not be following the standard unquestionably.

APRA will act in their own interest. They have a responsibility for financial system stability ie to protect the banks. If that’s best done via implied tax payer guarantees then so be it. They have promoted themselves historically as a strong regulator, when they’re just average. Any significant increases in capital requirements in a single step would show that they have been average.

Major Banks’ capital ratios may be unquestionably average but perhaps APRA still has them on a path to “unquestionably strong”.  To repeat the focus of APRA on residential mortgages:

“A central element of the implementation approach for ‘unquestionably strong’ will therefore be strengthened capital requirements for residential mortgage lending. “

Increases in capital generally for Major Banks plus specific increases in capital or risk weight requirements for residential mortgages will severely limit these banks ability to continue to drive residential mortgage credit growth in Australia. It’s likely to turn their growth and asset targets away from mortgages to business lending for a more balanced lending book. This future scenario opens up the Australian mortgage markets to competitors especially competitors in the non-bank sector that use technology to provide borrowers with a better deal.